Close
0 items  |  $0.00
Sign In / Sign Up
REQUEST TO BE AN ON-LIFT DEALERAbout UsContact UsSign up for our Newsletter
X
Please provide the following information & we will contact you to process your order

X
REQUEST TO BE AN ON-LIFT DEALER

Productivity, Safety Cost Avoidance, Driver Recruiting and Retention
Any one of these benefits provides Strong Justification for investing in Patriot Systems! If you need to take advantage of Critical Patriot Lift® Benefits in all 3 Areas, then you have hit a Grand Slam by investing in our unique Lifting Systems!

Learn More >
Management and Operations In Your Daily Scramble to Balance Customers, Management, Owners, and Drivers

From the Eye of The Hurricane — Did You Know
Learn More >
Productivity Gains If your Driving Teams average 4 to 5 Hook and Drops per day, learn how you can pick up another 2 days of freight hauling each month with no increase in fixed cost.


Learn More >
Safety WHAT IS MORE IMPORTANT THAN THE SAFETY OF YOUR DRIVERS Learn about Safety Cost Avoidance using Patriot Lifting Systems. Did you know you can eliminate one entire category of common Injury for Truck Drivers? 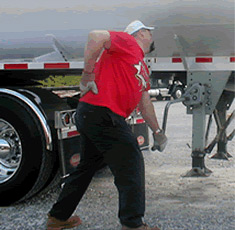 Did You Know?
"According to Labor Department statistics released on April 10, 2002, truckers suffer the greatest number of injuries and illnesses resulting in lost work time. Truckers also had the highest median number of days away from work. The numbers are staggering. More than 40 percent of these were sprains or strains, most often involving the back. Overexerting while moving objects and contact with equipment were the greatest cause of injury. Clearly, there is a need to eliminate these injuries."
useful information
WARRANTIES
COMPANY INFO
14 White Birch Lane, Units C&D York, ME 03909
207.703.8433info@onlift.com
FOLLOW US
© Patriot Lift Co., LLCPowered by DreamingCode
x